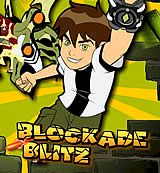 Vilgax’s robots finally capture Ben and take him to Vilgax’s ship. Vilgax removes the Omnitrix from Ben’s wrist and locks him in a cell. Left unattended, Ben breaks loose. Now he must collect the pieces of the Omnitrix and escape from Vilgax’s lair! Move Ben with the mouse. Don’t let the ball get past you. Use the ball to destroy the blocks. Catch the falling bonuses. When The Omnitrix is ready. Press Z to clear the screen. Collect a hero bonus to turn alien. Some aliens fire projectiles. Click to shoot.